Fale a língua do mundo. Faça Wise Up.
Fri 23 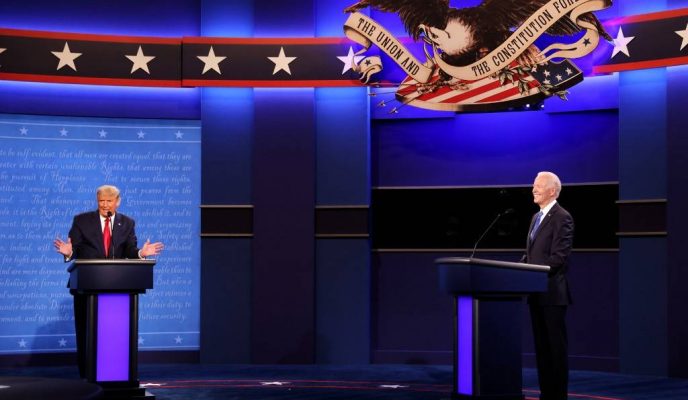 During the last debate before this year’s United States presidential elections, current president Donald Trump and former vice-president Joe Biden faced each other in a showdown which will hardly change the opinion of their supporters and did hardly anything to motivate undecided voters to sway this way or another. Meanwhile, the Brazilian Senate has approved the appointment of judge Kassio Nunes Marques for a seat at the country’s Federal Supreme Court, despite several notorious ideological differences with the head of the executive. Bolsonaro also publicly declared he will not allow Brazil’s Health Agency, ANVISA, to approve a China-produced vaccine against the coronavirus, in a growing arm-wrestle against the governor of the state of São Paulo, João Doria, who had set up a joint partnership between Chinese laboratory Sinovac and the Butantan Institute. A recent study done by Jama Pediatrics determined that mothers infected by the novel coronavirus should not stop breastfeeding. Finally, China, Cuba and Russia, countries which have been condemned for their human rights records, have all been accepted into the United Nations Human Rights Council.

Trump and Biden square off in final debate

On Thursday evening, both candidates running for the office of president of the United States, current officeholder and Republican party reelection candidate Donald Trump and his rival, former vice-president and Democrat candidate Joe Biden, came face to face before the final deadline of November 3rd. The event was held at Belmont University, in Nashville, Tennessee, and was mediated by NBC journalist Kristen Welker. In order to avoid the constant interruptions and retorts between both candidates, the microphone of each candidate was muted during the first two minutes of their counterpart during every answer. Topics ranged from the efficacy of the current government’s fight against the COVID-19 pandemic in the country to attempts from China, Russia, and even Iran to interfere in this year’s elections.

The Brazilian Senate approved on Wednesday evening judge Kassio Nunes Marques as the newest member of the country’s Federal Supreme Court. After the confirmation hearing, the appellate judge appointed by president Jair Bolsonaro was approved with 22 votes in the Constitution and Justice Commission, and 57 votes against 10 on the Senate floor – with one abstention. During the days which preceded the ceremony, both politicians who were close to the president and those who were fiercely opposed to him tried to soften criticism against Marques. Journalists and independent commentators, however, and have expressed their concern towards the willingness of this new Supreme Court justice to defend the basic liberties guaranteed by the Brazilian Constitution.

Bolsonaro says ANVISA will not rush to approve vaccine

Brazilian president Jair Bolsonaro once again addressed the controversial issue of the COVID-19 vaccine in his weekly live broadcast held on his social network channels every Thursday. According to Bolsonaro, Brazil’s National Health Agency, ANVISA, will not rush in order to approve a vaccine against the novel coronavirus in the country. “Admiral Barra (ANVISA’s director) said (…) that he will not authorize the distribution of this vaccine in 72 hours in Brazil. After all, it’s a huge responsibility.” Meanwhile, the director of São Paulo’s Butantan Institute said that ANVISA is purposely slowing down the authorization for the import of the raw material made by Chinese company Sinovac, which would enable the production of a vaccine in Brazil.

Mothers infected with COVID-19 should carry on breastfeeding

Even after being diagnosed with COVID-19, mothers should not stop breastfeeding their newly born sons or daughters, according to a recent study published by Jama Pediatrics, which involved 101 children born and breastfed by mothers diagnosed with the novel coronavirus in New York. The study determined that mother-infant contagion cases were extremely rare after births, and that even when deprived of breast milk, children may still be vulnerable to worse health conditions. During the study, only two cases were identified where patients eventually tested positive for the novel coronavirus, and neither developed any symptoms of the disease.

Despite protests from activists, political dissidents and even members of foreign governments, China, Cuba and Russia have been given a seat on the United Nations’ Human Rights Council, the organ responsible for advising the institution in situations which involve any human rights violations. Given that China has been involved for years in repressive actions against Uyghur minorities in its Eastern provinces, as well as pro-democracy protesters in Hong Kong, Cuba is maintaining for decades a strict Socialist one-party dictatorship, and Russia is being investigated for the recurrent killing of dissidents all over the world, the decision is being widely criticized by several other countries, especially in the Western world. Saudi Arabia, another country with a long-standing record of human rights violations, had its application denied for the position.