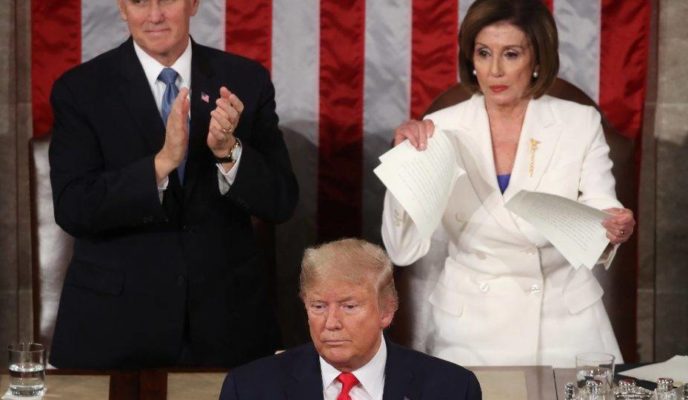 Yesterday, United States president Donald Trump delivered his annual State of the Union address to Congress; the event was marked by a protest by Speaker of the House Nancy Pelosi, who tore up a printed copy of Trump’s speech. The Chinese doctor responsible for raising warning flags about the coronavirus epidemic has been diagnosed with the virus and has been admitted to an intensive care unit in Wuhan.  Former Brazilian president Luiz Inácio Lula da Silva asked the judge responsible for one of the several lawsuits to which he is currently answering to postpone an interrogation session in order to visit Pope Francis in the Vatican. The Brazilian government has appointed an Evangelical missionary to be in charge of the department responsible for interactions with uncontacted Indian tribes in the Amazon, a decision questioned by non-governmental organizations. Finally, a strike organized by garbage collectors in France to protest president Emmanuel Macron’s recent pension reform plan has caused a major rubbish pile-up on the streets of Paris, including most of its major tourist sites.

Trump’s State of the Union address: emphasis on economy and torn speech

United States president Donald Trump made his third annual State of the Union address to Congress on Tuesday evening. In a year of presidential elections and amidst an impeachment process, the climate at the House was one of profound polarization. Trump was welcomed by chants of “four more years” by the Republicans, who applauded all of his lines, while Democrats remained silent throughout the speech. The president celebrated the current state of the economy and the low unemployment rates in the country. There was also drama: as he rose to the podium, he seemed to snub Speaker of the House and opposition leader Nancy Pelosi, who tried to shake his hand; she responded by ripping up the pages of the speech he had previously handed her.

Chinese doctor who warned about epidemic is diagnosed with coronavirus

34-year-old ophthalmologist Li Wenliang, responsible for the first warnings to the medical community in the early days of the coronavirus epidemic, has been diagnosed with the illness. Wenliang worked at Wuhan’s Central Hospital when he heard about patients in the hospital’s quarantine sector with a disease similar to SARS, a viral infection which killed over 700 people in 2003. After his messages warning colleagues about the dangers posed by the new virus went on social media, he was visited by Chinese authorities, who accused him of “spreading fake information” and “gravely endangering the social order.” Yesterday he told CNN he was diagnosed with the disease on February 1st, and is currently at a local intensive care unit.

Brazilian ex-president Luiz Inácio Lula da Silva informed Brasília 10th Federal Criminal Court judge Vallisney Souza de Oliveira he will travel to the Vatican to meet Pope Francis on February 13th, and asked for the postponement of the interrogation due to his involvement in the Federal Police’s Operation Zelotes, scheduled for the 11th. In this lawsuit, the Workers’ Party politician is answering for the crime of solicitation for allegedly having taken part in the “auctioning” of 2009 provisional decree 471, which extended tax breaks for car manufacturing plants in several Brazilian regions.

The Brazilian Ministry of Justice and Public Safety appointed Evangelical missionary Ricardo Lopes Dias for the office of general coordinator for Uncontacted and Recently Contacted Indians in the Territorial Protection Directorate of the National Indian Foundation, FUNAI. The appointment of Dias for the position was harshly criticized and repudiated by the Coordination of the Indigenous Organizations of the Brazilian Amazon and other non-governmental organizations. The Federal Public Defender’s Office also asked FUNAI for explanations and expressed their “concern with decisions which might indicate changes in the public policies for the protection of uncontacted and recently contacted indigenous peoples.

Overflowing garbage dumpsters, foul smell and proliferation of rats is the scenario today in Paris, a worldwide center for art, fashion, gastronomy, and culture. Tons of rubbish have piled up during the last ten days on the streets of the French capital due to a strike of garbage collectors and incinerator workers against the pension reforms implemented by president Emmanuel Macron. On Tuesday, huge black garbage bags and cardboard boxes littered the sidewalks of several neighborhoods, turning into obstacles for passers-by. Not even touristic spots, such as the famous Champs-Élysées Avenue, with its high-end designer stores, escaped the dirt and the stink of rotting food accumulated for more than one week.