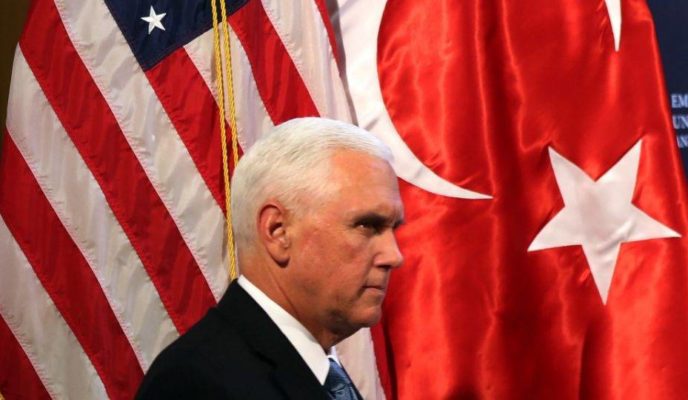 Turkey has agreed to sign a five-day ceasefire in its military incursions in northern Syria after negotiations conducted by United States vice-president Mike Pence. A robbery at Viracopos International Airport, in the Brazilian city of Campinas, has ended disastrously with the death of all three criminals and several people injured, including one hostage briefly held by one of the robbers. Brazilian president Jair Bolsonaro, currently facing an internal crisis within his own party, PSL, has withdrawn the nomination of his son to the office of ambassador in the United States, allegedly due to the fear of not obtaining enough votes in the Senate supporting the appointment. Venezuela won a seat on the United Nations Human Rights Council, after a secret ballot election which has been widely criticized by NGOs and diplomats throughout the world due to the South American country’s poor human rights record. Finally, the Islamic State has publicly claimed to have “rescued” women being held in prisoner camps managed by Kurds previously to the recent incursion by Turkish troops in northern Syria.

Turkey has agreed to a ceasefire suspending its military operations in Syria and temporarily interrupting all violent combats against Kurdish forces, which have been going on for over a week. The agreement also allows Turkish president Recep Tayyip Erdoğan to create his long-coveted buffer zone beyond the borders of his country. The deal, announced by United States vice-president Mike Pence after hours of negotiations, seems to give the Turkish leader almost everything he wished for when his military launched its attack on northern Syria: the expulsion of Kurdish militias from the border and the end of the threat of US economic sanctions on Turkey.

The Viracopos International Airport, in Campinas, São Paulo, was the site of a cinematic armed robbery on Thursday. According to news portal G1, two security guards were shot during an attack on an armored car and the suspects then placed a truck across Santos Dumont Highway and set it on fire before continuing on the run. The suspects were using cars which resembled vehicles used by the Brazilian Air Force. During their escape, two of them were shot by the police and another one took one woman and her toddler as hostages. After tense negotiations, a sniper managed to shoot the criminal; the woman suffered non-lethal injuries.

The likely lack of votes in the Brazilian Senate and the internal crisis faced by the ruling party, PSL, has pushed president Jair Bolsonaro to withdraw the appointment of his son, congressman Eduardo Bolsonaro, to the office of Brazil’s ambassador in Washington D.C. According to Época magazine, Bolsonaro has “zero” chance of submitting his nomination to the Senate in 2019. The magazine also added that the president will attribute his changes of mind due to the fact that Eduardo is a key player in the president’s political articulation.

The United Nations elected Venezuela to be the newest member of the organization’s Human Rights Council, after the South American country obtained 105 votes out of 193 voting countries. Starting in 2020, Venezuela will take over the seat currently occupied by Cuba. The decision was widely criticized by diplomats and NGOs, due to dictator Nicolás Maduro’s notorious human rights violation record. The secret ballot election for the renewal of the countries which make up the council was held on Thursday, and Brazil was also reelected for a new three-year term. Latin America is currently represented in the organ by Argentina, Bahamas, Brazil, Chile, Cuba, Mexico, Peru, and Uruguay.

On Thursday, the Islamic State, ISIS, released footage of the alleged “rescue” of a group of women who they claim were members of the jihadist organization and were being detained by Kurdish militias in the Raqqa province of northern Syria, amidst attacks made by Turkish troops in the region. The incident happened hours before the United States and Turkey signed a ceasefire in the region. According to Amaq news agency, used by the group for propaganda purposes, ISIS fighters entered installations held by the Kurdistan Workers’ Party, PKK, killed six members of the organization, and freed all women being held captive.