Fale a língua do mundo. Faça Wise Up.
Wed 07 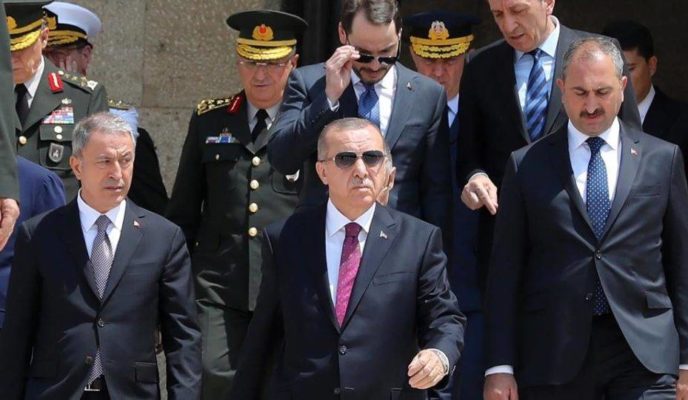 The Turkish government confirmed it has destroyed over 300 thousand books, in a move to eliminate any mention of clergyman Fethullah Gülen, accused of trying to overthrow president Recep Erdoğan in an attempted coup in 2016. The United States announced new economic sanctions on Venezuela, and warned companies and countries throughout the world, including China and Russia, that any attempt to trade with the government of dictator Nicolás Maduro will be severely punished. Giant tech company Google unveiled its plan of using recycled materials in all its hardware products by 2022. Iran presented this week a new series of intelligent and precision-guided missiles, further increasing the Islamic Republic’s tensions with Western countries. Finally, Former Brazilian president Luiz Inácio Lula da Silva will be transferred from his cell at the Federal Police headquarters in Curitiba to a penitentiary in the state of São Paulo.

More than 300 thousand books from schools and libraries in Turkey have been destroyed by the government of president Recep Tayyip Erdoğan since 2016, according to the country’s Ministry of Education. The action aims at erasing any mention of clergyman Fethullah Gülen, accused of instigating an attempted military coup against the Turkish president in 2016. Gülen, who currently lives in the United States, denies the accusation. Among the 301,878 books destroyed were works of fiction, history, and educational books. A group of independent journalists denounced that among the books destroyed were some that merely contained the clergyman’s initials, or others which had the word “Pennsylvania”, the US state where Gülen currently lives.

US imposes new and harsher sanctions on Venezuela

United States president Donald Trump announced yesterday that his government is ready to punish Russia, China, or “any person” who continues to support Venezuelan dictator Nicolás Maduro, as part of the new economic embargo announced on Monday. “To both Russia and China, we say that your support to the Maduro regime is intolerable, particularly to the democratic regime that will replace Maduro,” said US National Security Adviser John Bolton. The measure prohibits companies and individuals from any form of trade with the Maduro government. This is the first such action in the Western Hemisphere in more than three decades.

Giant tech company Google announced this week that by 2022 all its hardware products will be manufactured using recycled materials. The company also plans on zeroing out their carbon emissions two years earlier. Both actions are part of the company’s strategy of rethinking the design of their products, focusing on sustainability. “Some people think design is about making things look pretty or looking good. And really design is about solving problems for humanity. (…) And [sustainability] is (…) probably the most important problem of our lifetime,” said Google’s hardware design team head Ivy Ross.

Amidst Iran’s increasing tensions with the United States, the Ministry of Defense of that country presented three new “intelligent and precision-guided” missiles in an event on Tuesday. Fully manufactured and developed by Iran Electronics Industry, they were named “Yasin”, “Balaban” and “Qaem”, and were formally presented by the country’s Defense minister Amir Hatami. “It shows that despite the viciousness and conspiracies of the Great Satan America and its mercenaries, the Defense ministry will not hesitate for a moment to defend the Islamic Republic and to expand security,” said Hatami.

Lula will be transferred to São Paulo state penitentiary

Former Brazilian president Luiz Inácio Lula da Silva will be transferred from his cell at the Federal Police headquarters in Curitiba to a penitentiary in the state of São Paulo, after a ruling by 12th Federal Court judge Carolina Lebbos. The penitentiary, located in the city of Tremembé, is home to several infamous inmates whose crimes had extensive media exposure. In the decision, judge Lebbos did not guarantee facilities similar to the ones currently occupied by Lula in Curitiba, destined to high-ranking authorities. It is estimated that the incarceration of the former president has already cost over R$ 4 million to the state’s coffers.