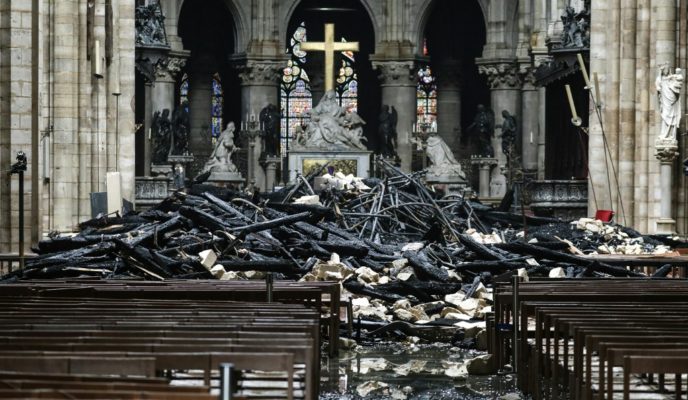 855-year-old Gothic cathedral was the most visited monument in Europe, and welcomed 12 million people per year

The Notre Dame Cathedral, which was engulfed by a large fire on Monday (15), had been showing signs of decay for years. A symbol of medieval Gothic architecture and World Heritage Site, the church, which began to be built in 1163, had undergone interventions and renovation works, but was still in an advanced state of decay, denounced by those responsible for the institution that maintained it.

In 2017, a foundation was created to raise funds for a more extensive renovation, Friends of Notre-Dame de Paris, but it was yet to begin any work, since it was scheduled to cost between 100 and 150 million euros. A smaller-scale renovation, estimated in 6.8 million dollars (around R$ 26.3 million), had been initiated this year. Five days ago, 16 of the statues on top of the cathedral had been removed and sent to an exposition. It is not even known, however, which of the rest of the works of art in the cathedral were being exhibited to the public when the fire began, nor if any of them was removed before the heat of the flames got too intense.

The origin of the fire is still not known, but rumors among the firefighters leaked to the media indicate that it is possibly linked to this renovation process. In a statement to the French press, cathedral spokesman, André Finot said that the blaze engulfed the whole church, and most of its wooden structure had already been destroyed.

According to Parisian newspaper Paris Match, one of the cathedral’s priests ensured the press that the fragments of Jesus Christ’s crown of thorns which were stored in the site were safe. The relic has been stored in the Notre Dame Cathedral since 1896, kept inside a tube made of crystal and gold.

According to 2017 data from France’s tourism office, Notre Dame Cathedral is the most visited monument in the country, receiving 12 million visitors each year, followed by the Sacre Coeur Basilica, with 11 million, and the Louvre Museum, which receives 8 million people annually. It welcomes each year twice as much visitors as the Eiffel Tower, the destination of 6 million tourists.

The 855-year-old cathedral began to be built during the tenure of bishop Maurice de Sully (from 1160 to 1196), and was part of a demographic project for the region of Paris on the shores of the Seine River.

It was built and named after the Virgin Mary (Notre-Dame, in French), and, although its cornerstones and its base were laid between 1163 and 1190, the foundations of the façade and the two tours, as well as the high gallery, were only built in the following century, and finished in 1250.

The building had several façades and access angles, in its external part, among which the most widely known is the Western façade. Seen from this side, the cathedral rises in vertical and horizontal lines and four flying buttresses that raise themselves and indicating that, symbolically, the cathedral was built for God.

The imposing building is 41 meters wide, 43 meters tall until the base of the towers, and 63 if the top of the towers is included. Its total area is 4,800 square meters.

Among the main architectonical aspects of the Gothic cathedral is the geometric perfection, using squares and circles which associate the work of the architects to that of God himself.

In the center of the façade, in the so-called Gallery of the Virgin, a large rose measuring 9.6 meters in diameter was built around 1225, and forms a sort of halo around the statue of the Virgin Mary. As well as the Western façade, the outer structure of the cathedral also includes the Red Door, the Portal of the Virgin, the Portal of Judgment, and the Sainte-Anne Portal.

During its almost millennial history, the Notre Dame Cathedral witnesses historical facts, such as the crowning of Henry VI, during the Hundred Years’ War, in the 15th century; and of Napoleon Bonaparte, in 1804, as well as the beatification of Joan of Arc, in 1909.

As well as its architectonical significance, the cathedral also has an incalculable artistic value due to the pieces of décor, history, and art lodged in its interior.

As well as paintings on the wall, out of the 78 17th century paintings in their collection, only 50 survived the test of time, and only 13 hung on its walls, among them pieces from artists such as Jacques Blanchard, Laurent de la Hyre, Charles Le Brun, Nicolas Loir, Luis Testelin, Gabriel Blanchard, among others.

On Twitter, Paris archbishop Michel Aupetit pleaded: “The firefighters of Paris are still fighting to save the towers of Notre-Dame de Paris. The frame, the roof, and the spire are consumed. Let us pray. If you wish, you can ring the bells of your churches to invite prayer.”