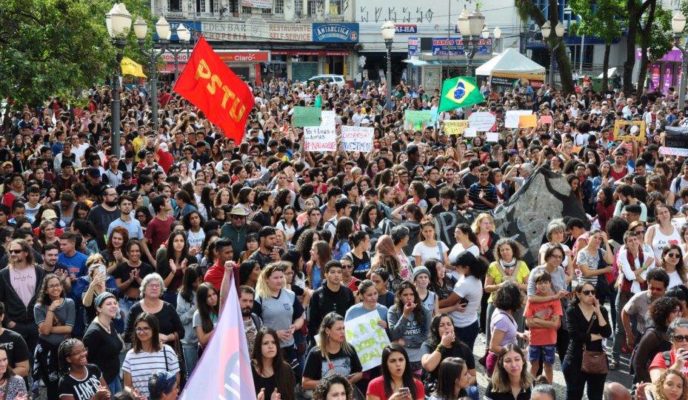 Universities throughout the country will stop their activities to protest against budget cuts of up to 30 percent decreed by Education minister Abraham Weintraub. Weintraub has been summoned by Congress to explain the reason for such budget cuts in higher education institutions. Bolsonaro will land in Dallas today to receive his ‘Person of the Year’ award. The award was originally scheduled to be given to him in New York, but local mayor Bill de Blasio claimed he was not welcome in that city. STF ruled that importing or owning cannabis seeds is not a crime, after Justice Celso de Mello determined that the seeds themselves do not have any active principle. The US state of Alabama approved a law which prohibits abortion in its territory and may sentence doctors who perform it to up to 99 years in prison. Finally, dictator Nicolás Maduro’s government accuses five members of the country’s National Assembly of treason, among other crimes.

Universities in 22 states stop their activities

Manifestations are scheduled today in more than 22 states throughout Brazil to protest against budget cuts of up to 30 percent in federal higher education institutions. Labor unions will also use these events to hold protests against the social security reform. Education minister Abraham Weintraub was summoned to Congress to explain the R$ 7.4 billion cut in the budget of his ministry, which includes the R$ 2 billion initially destined to the country’s federal universities.

Bolsonaro departs for his second US trip

Jair Bolsonaro will land today in Dallas, Texas, for his second official trip to the United States since he became president. Bolsonaro was initially scheduled to go to New York, where he would receive the Brazilian-American Chamber of Commerce ‘Person of the Year’ award; but after NY mayor Bill de Blasio criticized the Brazilian president, and said he was not welcome in the city, his award presentation ceremony was transferred to Dallas. Bolsonaro will also meet with former US president George W. Bush.

Importing cannabis seeds is not a crime, rules STF Justice

Importing or owning cannabis seeds is not a violation of the national Drug Law. The decision was determined by Federal Supreme Court Justice Celso de Mello after the adjudication of a habeas corpus petition issued on Monday. According to Celso de Mello, cannabis seeds have no active principle which might be manipulated in order to result in an illegal drug. He added that the lack of tetrahydrocannabinol prevents any physical or psychological dependence. The decision was the result of an appeal against the acquittal of a woman who had received seeds from the Netherlands.

The State Senate of the US state of Alabama approved a law which forbids abortion at any stage of gestation, with the sole exception of pregnancies which pose a health risk to the mother, or in cases of a lethal anomaly. Doctors who perform abortions may be sentenced to up to 99 years in jail. The bill will now be sent to the Republican governor of that state, Kay Ivey, who has six days to endorse it. Pro-abortion organizations have already said they will appeal the decision.

Venezuela’s National Constitutional Assembly, which backs up dictator Nicolás Maduro, announced the withdrawal of parliamentary immunity of five members of that country’s National Assembly. The latter, an independent institution led by self-proclaimed President Juan Guaidó, has been held in contempt by Maduro’s government since 2017. The congressmen have been charged with “betraying the fatherland, conspiracy, insurrection, civil rebellion and disobeying laws” after taking part in the April 30th protests.