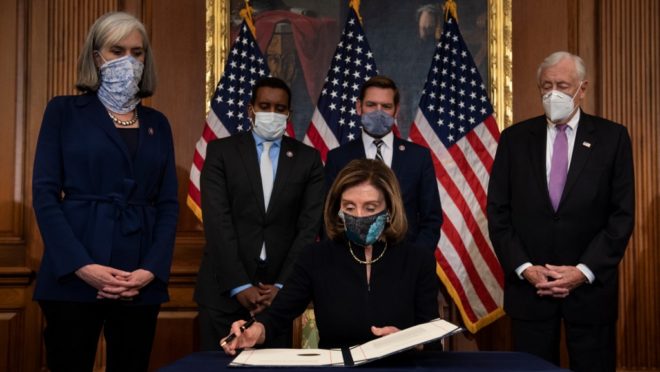 The United States House of Representatives has approved the impeachment of president Donald Trump, making him the only head of state in the country to be impeached twice. The matter will now be voted on by the country’s Senate. South America’s top soccer club championship, Copa Libertadores, will have an all-Brazilian final; both Palmeiras and Santos defeated their Argentinian rivals in their semifinal matches, and will now face each other at the Maracanã stadium, in Rio de Janeiro, on January 30th. The population of the state of Amapá, in northern Brazil, is once again experiencing power outages, after having spent 21 days under a massive blackout late last year. Brazil’s Health minister, Eduardo Pazuello, announced that a cargo plane has already been scheduled to bring two million doses of the COVID-19 vaccine developed by Oxford University and manufactured by a local laboratory. Finally, former Bolivian president Evo Morales, who recently returned to his country after being exiled due to a controversial reelection process, has been admitted into a local hospital after being diagnosed with the novel coronavirus.

US representatives impeach Trump for “incitement of insurrection”

After United States vice president Mike Pence officially rejected the possibility of invoking the 25th Amendment of the Constitution to strip president Donald Trump of his powers, the House of Representatives held a vote in order to decide whether he should be impeached for “incitement of insurrection”. After a two-hour session, in which 232 legislators supported the decision, while 197 opposed it, Trump became the first president in the history of the country to be impeached twice. All Democrat representatives voted for the impeachment, as well as 10 members of the Republican party. The decision will now be discussed and voted on in the US Senate. Trump is being blamed for inciting a crowd of supporters who stormed the US Capitol during a session ruling on the presidential election results, causing the death of five people.

Copa Libertadores to have an all-Brazilian final

After an edition of the tournament which is unlikely to be forgotten, due to the special circumstances in which matches are being played because of the restrictions imposed by the novel coronavirus pandemic, the final of the 2020 Copa Libertadores, South America’s top soccer club championship, will be decided between two Brazilian teams, both of them hailing from the state of São Paulo. Both of them defeated long-standing rivals from neighboring Argentina; Palmeiras managed to secure their place at the final after winning the away match in Buenos Aires against River Plate by 3 goals to 0, and losing the return match by 2-0, while Santos held on to a 0-0 tie in Buenos Aires against Boca Juniors only to beat them at the Vila Belmiro stadium by 3 goals to 0. The final match will now be held at Rio de Janeiro’s legendary Maracanã stadium, on January 30th.

A new power outage has affected several cities in the northern Brazilian state of Amapá on Wednesday afternoon. The problem originated at a section of the transmission line operated by Linhas de Macapá Transmissora de Energia, LMTE, and affected the same 13 cities which spent 21 days under a total blackout between October and November last year, due to a fire at a Macapá electrical substation owned by LMTE. The company issued a statement claiming that the problem had been solved and electricity was quickly restored to all customers, describing the incident as an “external occurrence beyond its control”, adding that “such incidents happen daily in Brazil” and “expose the frailty of Amapá’s energy system”.

A cargo plane is scheduled to take off today from São Paulo towards India, where it will be loaded with two million doses of the COVID-19 vaccine developed by Oxford University. The aircraft should return with the immunizing agents to Brazil by Saturday. The National Health Inspection Agency, ANVISA, officially approved a request made by the Fiocruz Institute on January 2nd for the import of the medication. Last week, president Jair Bolsonaro sent a letter to Indian prime minister Narendra Modi requesting the anticipation of an “urgent” supply of the vaccine, which was developed by the Oxford University and pharmaceutical company AstraZeneca, but is being mass produced by an Indian laboratory, Serum Institute. Brazilian Health minister Eduardo Pazuello said the capital of Amazonas, Manaus, would have priority in the immunization process, due to the severity of its current death rate.

Bolivia’s former president, Evo Morales, has been diagnosed with the novel coronavirus. According to members of his staff, the 61-year-old is currently at a hospital in stable condition and receiving the proper medical care, but no further details were released regarding his health condition. Morales stepped down from office in 2019, after a wave of protests caused by a controversial reelection in which he was accused of violating the local constitution, but recently returned to the country after his ally Luis Arce was elected president. The ex-president has been meeting supporters throughout the country, even though intensive care units are near collapse due to the spike in the number of cases following the holiday season.