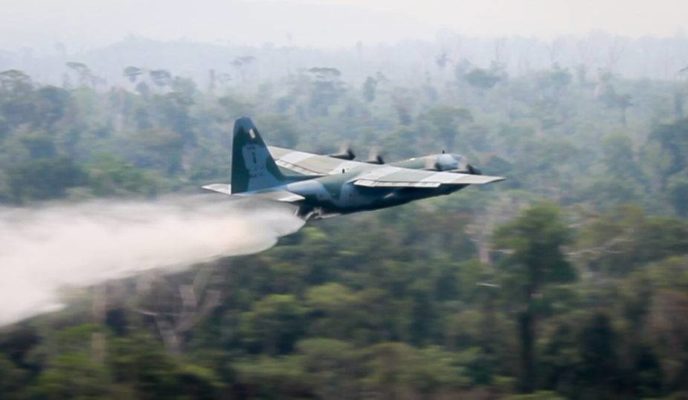 Police in Pará, Brazil, have arrested four members of a volunteer fire brigade in Alter do Chão, accusing them of being responsible for causing the fires which destroyed part of the local forest. US president Donald Trump announced that Mexican drug cartels will now be classified as “foreign terrorist organizations”. Brazilian president Jair Bolsonaro reiterated his promise to appoint an evangelical justice for an upcoming seat in the Federal Supreme Court. A powerful earthquake hit the Eastern European nation of Albania, killing at least 23 people and injuring hundreds more. Finally, an explosion at a petrochemical plant in East Texas has injured three employees and forced several local inhabitants within half a mile radius from the site to evacuate their homes.

Four members of the Alter do Chão volunteer fire brigade have been arrested on suspicion of being responsible for the recent fires which destroyed part of the forest in the Environmental Protection Area of Santarém, Pará. Three NGOs also listed in the inquiry deny their involvement with any irregular action and claim their offices were broken into by heavily armed police. Investigations of Operation Fogo Sairé indicated that members of the volunteer fire brigade caused the fires in the Alter do Chão forest; the region has been frequently targeted by real estate speculation, with construction companies interested in building on protected land.

United States president Donald Trump said on Tuesday that Mexican drug cartels “will be designated as “foreign terrorist organizations.” In a radio interview with journalist Bill O’Reilly, the president pointed out that he had already suggested the deployment of military personnel in Mexico to fight organized crime, but that it was refused by his Mexican counterpart, Andrés Manuel López Obrador. According to Trump, “I have been working on that for the last 90 days. You know, designation is not that easy, you have to go through a process, and we are well into that process.”

Bolsonaro promises again an evangelical justice in the Supreme Court

Brazilian president Jair Bolsonaro promised again he will appoint a “terribly evangelical” justice for the Federal Supreme Court. On Tuesday evening, during a trip to Manaus, Bolsonaro spoke at a religious ceremony dedicated to him at the Assembly of God church, and told those attending the event: “I have two seats, and one of them will belong to an evangelical.” The first vacant seat will be opened after the compulsory retirement of justice Celso de Mello, in November 2020, when the court’s eldest member reaches the age of 75. The other will be free in 2021, after Marco Aurélio Mello’s departure.

At least 23 people have been killed, several more are missing and hundreds are injured after an earthquake struck Albania on Tuesday. The quake, which had a preliminary rating of 6.4 magnitude, hit the Balkan nation at around 3:54 a.m. local time. Albanian president Ilir Meta said that the situation in Thumanë, the closest to the epicenter, is “extremely dramatic.” “We are doing all we can to remove people from the rubble,” he added. Authorities sent 300 members of the military to take part in emergency operations in the cities of Durrës and Thumanë; several people are still trapped under the debris of collapsed buildings, according to prime minister Edi Rama.

A massive explosion at a plant that produces chemical and petroleum-based products in East Texas forced local residents within half a mile of the site to evacuate their homes on early Wednesday morning. The refinery belongs to the world-renowned TCP Group; company spokesmen said three employees were injured and are currently under observation. The blast caused extensive damage to homes and businesses, blowing out windows and rattling houses for miles, according to local officials, who also told people to stay off the roads which lead to the plant.