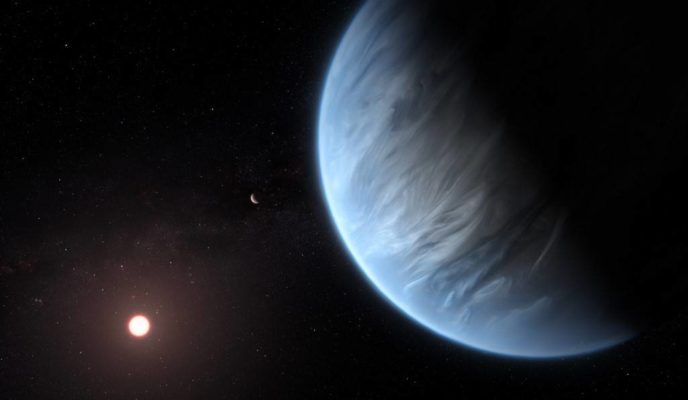 Traces of water have been found in the atmosphere of a faraway planet for the first time by astronomers from the University of Montreal, raising the possibility of finding traces of life or the possibility of turning it into a habitable environment for humans. The first Brazilian in space, astronaut Marcos Pontes, currently holding the office of Science and Technology minister, has been hospitalized in Brasília; in a letter to journalists, however, he stated that his condition is not serious. The Brazilian National Traffic Council announced that the new rules to obtain a driver’s license in the country will be effective by next Monday. Researchers from the University of Oxford have discovered a gene which determines whether a person will be left-handed. Finally, in an interview with French newspaper Le Monde, former president Luiz Inácio Lula da Silva, currently under arrest at the Federal Police in Curitiba, criticized the government of Jair Bolsonaro and said he still hopes to be declared innocent.

Water is found for the first time on potentially habitable planet

By the faint and red light of a faraway sun, scientists from the University of Montreal found traces of water in the atmosphere of a rocky planet. This is the first time such a discovery has been made, and it could become a new target in the quest for other life forms in the universe. The intriguing planet, which has been named K2-18b, is located outside the solar system, 110 light-years from the Earth, in the constellation of Leo. It lies within the so-called “habitable zone” of its sun, receiving just enough heat to allow water to exist in liquid form on its surface. It is twice as big as the Earth and eight times as heavy, with a powerful gravity that could make it difficult for humans to walk on it.

Science and Technology minister is hospitalized in Brasília

Brazilian Science and Technology minister and astronaut Marcos Pontes has been admitted into the Armed Forces Hospital, in Brasília, on Wednesday evening. According to news portal G1, he is still in hospital, but wrote in a message to journalist Andréia Sadi that “I am at the hospital, but I won’t have to stay here. I haven’t had a heart attack. Yesterday afternoon I didn’t feel well and they are taking exams and tests.” The minister was expected at the Congress, where he would take part in a session of the Environment Commission. Pontes became famous after becoming the first Brazilian in space.

The new driver’s license rules to be effective next week

Starting next Monday, the new rules to obtain the national driver’s license in Brazil will be in effect. The changes have already been published in a new resolution by the National Traffic Council and, among other changes, establish the non-requirement of the use of a simulation in driving schools, and the reduction on the number of hours required for night driving practical lessons. These new rules are expected to lower costs charged by driving schools by up to 15 percent, according to an estimate by Infrastructure minister Tarcísio Freitas.

Researchers from the University of Oxford, in the United Kingdom, were the first to identify the genes associated with the use of the left hand in the so-called “lefties”. The team identified four genetic loci on the human genome which play a key role on handedness, and were able to thus verify that, among left-handed people, both the left and right hemispheres of the brain were more coordinated in the regions controlling language. The study also associated left-handedness with a higher risk of mental diseases such as schizophrenia, but a lower risk for others, such as Parkinson’s disease.

‘Bolsonaro is a result of rejection towards politics’, says Lula in Le Monde interview

In an interview published on Thursday by French newspaper Le Monde, former Brazilian president Luiz Inácio Lula da Silva, currently under arrest in Curitiba after being convicted for corruption, said that the election of Jair Bolsonaro was “first and foremost, the result of a rejection towards politics.” He then added: “this is a government of destruction, with no vision of a future whatsoever, without any program, which is not qualified for power.” Lula said that “the people should react” against fires in the Amazon, but emphasized he opposes any form of international control in the region. He concluded the interview defending his release from prison: “all I want is for them to acknowledge my innocence.”