Fale a língua do mundo. Faça Wise Up.
Mon 21 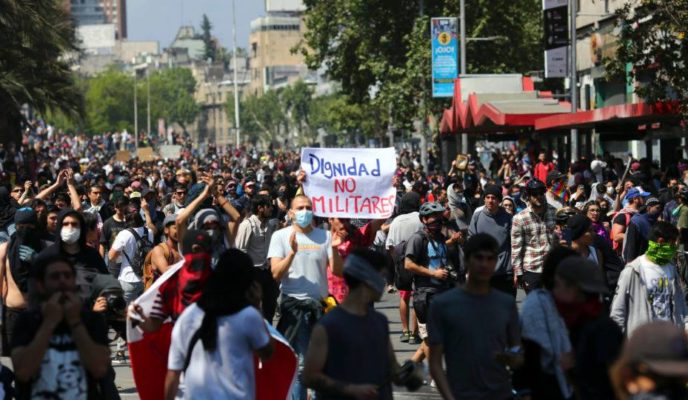 Fierce protests held in several Chilean cities have left at least seven people dead and several others wounded. Meanwhile, in Lebanon, thousands of people of all ages took to the streets in peaceful protests against corruption and the ruling political elite. The Brazilian National Health Regulatory Agency, ANVISA, has established all necessary requirements for the production and sale of desalinated saltwater by private companies in the country’s market. US tech giant Google’s drone company has begun delivering commercial products to residential homes, after being granted authorization by the FAA; previously, only special deliveries, such as medical supplies, had been authorized. Finally, the government of Spain has announced it will donate 50 million euros to several South American countries to help deal with the migration crisis resulted from refugees fleeing the crisis in Venezuela in order to settle in neighboring nations.

Seven people died during intense protests held in Chile throughout the weekend. The figures were released by Chilean Interior minister Andrés Chadwick. In some neighborhoods of the country’s capital, Santiago, local inhabitants have organized themselves to protect their homes from looters. According to the international press, two people died in a fire caused by protesters at a supermarket, and five others in a fire at a factory. On Sunday, president Sebastián Piñera decreed a curfew for the second time, and asked the population not to leave their homes after 7 p.m.; the country has been under a state of emergency after protests against raises in subway ticket prices.

Thousands take to the streets of Lebanon in anti-government protests

Thousands of people of all ages filled the streets of Lebanon’s major cities on Sunday demanding the end of corruption and the domination of the country’s political elite. The number of people who took to the streets grew bigger by the hour, in the largest anti-government protests so far in four days of demonstrations. Protesters sang and danced in the streets, waving Lebanese flags and chanting “the people want to bring down the regime.” On the following morning, young people carrying blue bags could be seen collecting the previous night’s trash from the streets of the capital, Beirut. The climate of political dissatisfaction reached its peak after the government proposed new taxes as part of a new economic austerity package.

The Brazilian National Health Regulatory Agency, ANVISA, has established the requirements regulating the desalination of seawater for human consumption. Since Friday, desalinated saltwater has been added to the list of types of bottled drinkable water available to the public. Previously, only water obtained from freshwater sources was authorized for mass production. The inspecting organ will analyze all stages of production and desalination in order to check for the presence of toxic substances, and be able to grant the final authorization for the sale of the product. According to ANVISA, all interested companies will have two years to adjust to the process.

Wing, tech giant Google’s drone company, has been granted all necessary authorizations by the United States Federal Aviation Administration, FAA, and made on Friday its first commercial delivery of a product to a residence in the country. So far, drones had only been used to deliver medical samples and some foodstuffs. Wing’s authorization process required thorough work in order to adapt to US drone rules, which might still limit its operations. The drones are made of the same kind of foam used inside bike helmets, and fly using a combination of 12 helicopter-like rotors and two wing-mounted propellers, reaching speeds of up to 50 km/h and carrying parcels of up to 1.3 kg. One pilot may monitor up to five autonomous aircrafts from a control cabin.

Spain’s Foreign Relations minister, Josep Borrell, announced on Saturday that his country will donate 50 million euros to some South American nations throughout the next three years. During a visit to the Colombian city of Cúcuta, Borrell announced the amount will be destined to help these countries deal with the Venezuelan migration crisis. According to El Nacional newspaper, the donation will be formalized during an international donor conference in Brussels between October 28th and 29th. Data have shown that over four million people have left Venezuela due to the crisis in that country; at least 1.4 million have settled in Colombia.