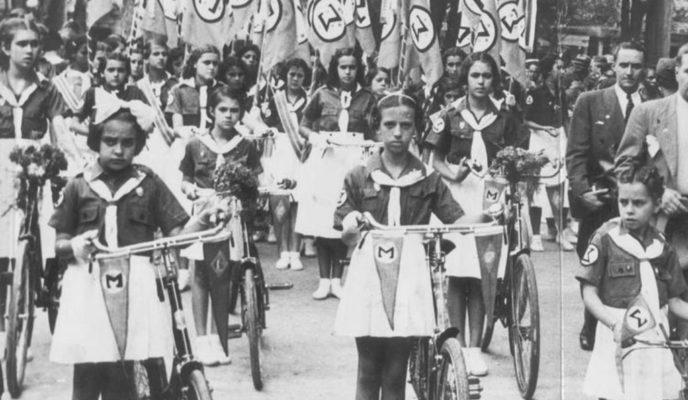 The Brazilian Integralist movement was idealized in the 1930s, inspired by European totalitarian regimes

A movement which appeared in Brazil in the 1930s became what is considered by historians the biggest fascist party outside Europe. The Brazilian Integralist Association lasted five years, but marked that period as one of the great movements in the history of Brazilian authoritarianism.

“It was a movement of an anti-liberal and anticommunist nature which appeared during the context of the rise of international fascist movements”, describes historian Renato Dotta, a researcher at the Integralism and Other Nationalist Movements Study Group.

Albene Miriam Menezes Klemi, a professor at the University of Brasília’s History Department, remembers that the interwar period was “marked by the crisis of liberalism, and there was a worldwide context of insecurities caused by crises in several countries, which evolved into an international crisis. It is in such context that movements and currents of fascist thought appear.”

The Integralist movement in Brazil was launched in October 1932, when the Fascist regime had already been in Italy for ten years, and Nazism was already present in most of Germany. “There was an international climate in which the anti-liberal right was seen as a solution for the contemporary problems”, explains Dotta.

In Brazil, since the 1910s, thinkers who were dissatisfied with the Old Republic’s formal liberalism had been proposing authoritarian solutions for the country. And in the early 1930s, while the reflexes of the 1929 crisis were felt, more thinkers with an anti-liberal and antileft nature appeared.

“In this context, one relatively young thinker thought of an authoritarian solution: it was São Paulo writer Plínio Salgado”, tells Dotta. Salgado was born in upstate São Paulo, and went to the capital to work as a journalist. There, he got involved with local intellectuals and took part in the Modern Art Week, in 1922.

In 1926 he published the novel “O Estrangeiro” (“The Foreigner”), which was widely read and praised by the critics at the time. In 1930, Salgado went to Europe, and visited many countries, including Italy. “He was fascinated by what was going on in Italy. He even wrote an article mentioning the admiration he had for the Italian regime, and how he saw that as a solution for Brazil”, says Dotta. Salgado was captivated by that government’s organization and the order he saw in that country.

From 1930 to 1932, Salgado exchanged letters with other Brazilian intellectuals, and wrote to a newspaper suggesting authoritarian solutions for Getúlio Vargas’ provisional government. The newspaper was printed in São Paulo and distributed all over the country. “Those contacts, and what he wrote on the newspaper, eventually formed a web of ideas, and he planted seeds of his ideals throughout Brazil.”

Officially, the Integralist Movement was founded on October 7, 1932, when Plínio Salgado published the manifesto with the movement’s ideas. After that, they got in touch with Fascist movements from other countries, “always feeling the need to reaffirm that Integralism was genuinely Brazilian”, stresses Dotta.

Salgado was a great enthusiast of Italian Fascism, especially the beginning of the movement. Militants liked to say that Integralism was the Brazilian Fascism. “Fascism was seen as a victorious regime. In the imaginary of the time, it was confronting of all of Italy’s structural problems, and the mainstream media broadcasted a positive idea of the Italian Fascism”, explains Dotta.

The founder of Integralism insisted on reaffirming the national character of the movement, although it had a symbology “unequivocally based on international Fascist movements.”

That inspiration could be seen, for instance, on their green shirts, the national version of the Fascism’s black shirts and the brown shirts worn by Nazis – they were nicknamed “green chickens” by their adversaries. The Integralist flag was formed by the Greek letter sigma, meaning the “sum of all Brazilians”. The symbol was also used in armbands worn by their followers during their marches.

If the view integralists had of Fascism was positive, their relation with Nazism was more complex. Several integralists were admirers of the German National Socialism during the 1930s. The most notorious of them was Gustavo Barroso, a journalist, historian, and writer from Ceará, who was then the director of the National History Museum. “He was a Nazism enthusiast, and was even an anti-Semite. Most of anti-Semitic books in Brazil were written by Gustavo Barroso”, Dotta tells.

Plínio Salgado, on the other hand, viewed Nazism with reservations, and criticized the regime – for instance, when Nazis persecuted Catholics. “That was not a consensus within the movement. Some integralists were Nazism enthusiasts, while others were not exactly opposed to it, but viewed it with reservations”, sums up Dotta.

“We cannot classify the Brazilian Integralist movement as anti-Jew, and that makes it different from Nazism in Europe, which preached the purity of the race and the superiority of the white man”, says Albene. “Plínio Salgado, unlike some of Gustavo Barroso’s views, turned to the population to build a movement which is considered the first mass movement in Brazil. The Brazilian nations is mixed, so he did not praise the white man nor racial superiority. He exalted the mixed-race man which forms the Brazilian people.”

Albene points out the points of similarity between Brazilian Integralism and Europe’s totalitarian movements: besides the use of symbols, the creation of an internal enemy. “The biggest enemies were the communists, and there are records of street fights between supporters of both movements.”

The Nazi movement did not support Brazilian Integralism, according to the historian. On the contrary, they “were even disgusted [by Brazilian Integralism], precisely due to the racial issue.” Besides, the professor explains that the Nazi International Party wanted to expand in Brazil, organizing itself into several units and with many supporters.

The movement spread in Brazil at a time in which the main communication media were radio stations and newspapers. The leaders of the movement also traveled around the country to make lectures and to bring people to their ranks.

Integralism had centers all over Brazil, and was extremely strong in Paraná and other southern states, in regions inhabited by sons of German and Italian immigrants. “Paraná had a very strong movement, but it was also severely repressed. The first integralist mayor was elected in a Paraná city, Teixeira Soares, in 1935”, tells Dotta.

In 1939, Plínio Salgado was arrested and exiled to Portugal, where he remained during the Second World War. During this period, integralists demobilized in Brazil. In 1942, when Brazil entered the war, the anti-integralist climate increased, and several members abandoned the integralist idea. “Many of them even made a public mea culpa.”

When the war ended, in 1945, the positive image that Nazism and Fascism had in some sectors in Brazil and abroad disappeared. “Nazism and Fascism became synonymous with barbarism, with the invasion of sovereign nations, the Holocaust, etc. The assimilation of Integralism with Nazi-Fascism was full, at that point in time, which made an Integralist rearticulation extremely difficult”, says the professor. Plínio was exiled, and some integralists who were here and had not renounced it publicly began to regroup, but eventually reached the conclusion that they could not recreate a party with the term “integralist” in its name. Therefore, they founded the Popular Representation Party (PRP) at the end of 1945.

The PRP did not use Fascism-related symbology, such as the sigma, Anauê or the green shirts. “Its antiliberalism was significantly reduced. I wouldn’t say it was completely banned from the ideology, but it was extremely relativized. The new world order was a democratic order. The only ideological aspect they kept was anticommunism”, says the historian.

The party took part in several elections, and elected several candidates. Plínio Salgado ran for president in 1955, when Juscelino Kubitschek was elected. Salgado came in fourth (and last) place in the election. “In Curitiba there was a very curious phenomenon in this election. Plínio came in last place, nationwide, but in that city he was the most voted candidate”, point out Dotta.

In the 1980s, with the boom of the urban tribes, some groups adopted Integralism as its ideology. “Like in Europe, skinheads have joined the ranks of neo-Fascist parties”, compares Dotta, who tells that groups such as Carecas do Brasil and Carecas do ABC have retaken the ideology in their fanzines. “It is a generational renovation of the integralist movement.”

In the late 1990s, with the impulse of the internet, many integralists websites appeared, not necessarily associated with these urban tribe movements. More recently, “they took to the streets in 2013, along with the movements which demanded the ousting of the Workers’ Party from power; these people came fully out of the closet”, says Dotta.

Nowadays there are two organizations which promote the ideology in Brazil: the Brazilian Integralist Front and the Brazilian Linearist Integralist Movement. The Brazilian Integralist Front has a Facebook page with over 14 thousand followers, and supported candidates in the last elections. Dotta considers it a small movement, with a restricted participation. “I believe it is a symbolic question. Since Integralism was an important movement in the past, any support from them to any candidate is not relevant in the electoral plan, but it is in the symbolic plan.”