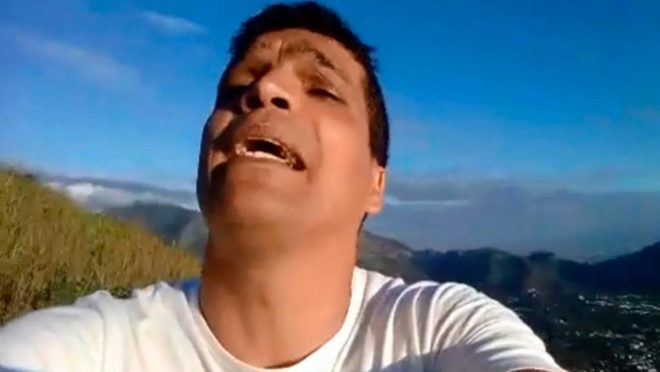 With 1.3 million votes, Daciolo came in sixth place, managing to leave behind in the presidential race more experienced politicians such as Marina Silva (Rede) and Henrique Meirelles (MDB)

Cabo Daciolo hit the peak of his popularity during the 2018 presidential elections. With a tiny amount of TV airtime (8 seconds, plus 11 other 30-second inserts), the then-presidential candidate made the debates – and the social media – his stage.

His sentences, his behavior, a strong Rio de Janeiro dialect with the constant use of the expression “Glory to God” became a meme – even those who disliked him imitated him. One of his videos became viral, in which he claimed he had run off to the top of a hill in order to fast, claiming a secret society wanted to kill him. More than once he vented his rage against Freemasonry and the Illuminati, and said he wanted to ‘tear down’ Havan’s statues.

With 1.3 million votes, Daciolo came in sixth place, managing to leave behind in the presidential race more experienced politicians such as Marina Silva (Rede) and Henrique Meirelles (MDB). Considering he had spent most of his campaign fasting and praying, isolated on the hill, this is no small feat.

After the elections, a doubt remained: where is Daciolo? He left the spotlight, but is still on social media. Even though he doesn’t post as often, he is still there, preaching and talking about politics. “Now they want to pass the social security reform, I say it will not pass, the social security system is profitable,” he wrote on the internet.

In a half-hour video posted on April 5, between prayers, the preacher talks about his will to do “something true, concrete, for the country,” but explains he found it difficult to talk about the idea during the election period.

“We had over one million votes. If we all set up a [savings] account – and that account is transparent for all of us – and each of us [who voted] deposit one real in it, see how much we can accomplish without remaining in the hands of the system,” says Daciolo. He argues that, with the money, it would be possible to take the word of God to the entire country, and help the needy with transparency.

On the other and, he says he has been receiving proposals to return to politics “in the position he chooses”, but he claims he should not follow this path, thereby justifying the idea of the donation. The ex-deputy says many of the invitations he received are for him to run for mayor, but he does not specify details of the proposals.

Against the social security reform

Daciolo spent a whole video talking about “the lie” involving the social security deficit. He says that the people are being “massacred” by the banks, and claims that the financial institutions owe money and do not pay their social security dues, accusing Paulo Guedes of being part of the scheme. He explains he spent a lot of time quiet, but he could not take anymore the “brazenness of the authorities of the Brazilian nation.”

He begins the video mentioning a lawsuit in which he is being investigated. According to news portal G1, he is accused of embezzling public funds through payments made to a company which allegedly belong to a member of the fire department.

Cabo Daciolo turned 43 years old on March 30. Some days after the celebration, he decided to give away one of his horses, “Gavião”.

He would give it to whoever explained the reason for wanting the horse and, of course, demonstrate his or her affection for animals – the main rule would be not to resell the animal. On Facebook, Daciolo announced that one of his followers, named Caio, had won.

Also in 2012, he was arrested again, under suspicion of violating article 155 of the Military Penal Code, “inciting disobedience, indiscipline, or the practice of a military crime.” He was returning from Bahia, where he supported the Military Police stoppage. During the time he spent in prison, he went into a hunger strike, refusing all meals served to him.

At the time, Globo TV’s Jornal Nacional released recordings of telephone conversations in which the corporal talked about his intention of taking the movement from Bahia to Rio. Also in 2012, he was expelled from the corporation, but in the following year, he was pardoned by Sérgio Cabral, then-governor of the state of Rio de Janeiro.

In 2014, Daciolo was elected federal deputy for PSoL, but was expelled from the party in 2015, theoretically after he defended 12 police officers accused of being involved in the death of construction worker Amarildo Dias de Souza.