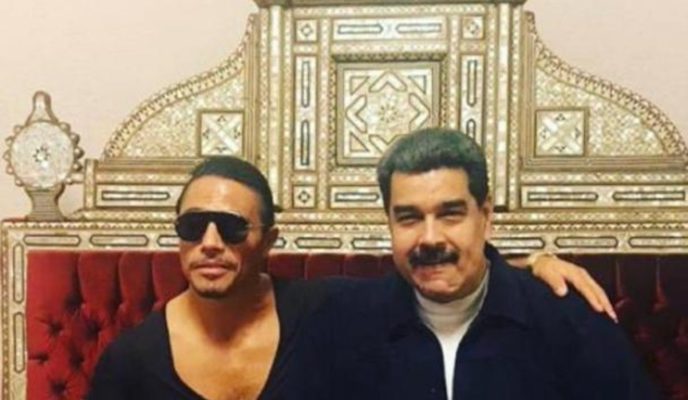 The bolibourgeoisie is made up of military personnel, public servants and executives linked to Chavism. Meet the class which has accumulated wealth amidst the economic, political and social downfall of the Bolivarian Republic of Venezuela

In early September, a controversy was caused by a video in which Venezuelan dictator Nicolás Maduro delighted himself with a lamb steak prepared by celebrity chef Salt Bae, in Istanbul, Turkey. The dish can cost up to US$ 275. In that same week, at Maracaibo, hundreds of people lined up at the Las Pulgas market to buy rotten meat, the only option available to those who wanted to ingest some protein. The product had been sold at a cheaper price due to the successive electricity cuts which have been affecting that country’s second largest city.

The scene of a well-nourished Maduro and her wife, Cília Flores, enjoying a banquet and smoking Cuban cigars, is a harsh contrast with Venezuelan reality. In 2017, 64 percent of the country’s citizens lost on average 11 kilos. While most of the 31.5 million Venezuelans are starving, a select group lives in their own universe. They are called bolibourgeois, a term which alludes to individuals who got rich after maintaining intimate connections with Chavism – first, during Hugo Chávez’s government, from 1999 to 2013, and then under Maduro’s rule.

The Bolivarian bourgeois seems not to have assimilated that the country’s bonanza stayed in the past, restricted to the oil boom of the first decade of the 2000s. They are still going to fancy restaurants, wearing expensive clothes and driving imported cars. They spare no expenses on trips to Miami, New York or Paris.

And it is not only in Venezuela or during their vacation that the bolibourgeois usually splurge. Part of them helped to inflate the real estate market in Madrid, where the price of real estate went up by 17 percent in 2017. In the Spanish capital, at least 7 thousand luxury apartments belong to Venezuelans. Some, it is true, have left the South American country before Chávez, or precisely to escape from him. But others have residences on both sides of the Atlantic, and depend on the government to keep enjoying the international jet set.

“Whether in Caracas or San Cristóbal, on weekends the most luxurious places and the most expensive restaurants are always crowded. There are places where no one knows about any crisis”, says Galaviz.

She mentions restaurant La Esquina, one of the most exclusive in the capital’s wealthy neighborhood of Altamira. There, on Thursdays and Fridays, “bulletproof SUVs abound”, according to the journalist. Another place frequented by the Venezuelan crème de la crème is Buddha Bar, a trendy Parisian chain where it is possible to eat sushi or drink cocktails for prices which are higher than the salary of an average worker.

In fact, the life of the bolibourgeois has no relation to what one sees in a bankrupt nation. Recent figures, disclosed during an UN assembly, show that 87 percent of the country’s inhabitants are poor, 61 percent are in a situation of extreme poverty, and 55 percent of the children up to the age of 5 are malnourished.

According to NGO Transparency International, Venezuela occupies the 169th place out of the 180 countries listed by the 2017 Corruption Perception Index – Brazil comes on 96th place. In the eye of this storm is Petróleos de Venezuela SA (PDVSA), which answers for 96 percent of the funds of the national tax authority. Recently, the Venezuelan Prosecution Office ordered the arrest of nine directors and former directors of the state-owned company for an alleged fraud involving the acquisition of fuel transportation tanks.

The case is merely one among hundreds, perhaps thousands: since August 2017, 90 employees of the oil company have been prosecuted for corruption schemes. One of them is Rafael Ramírez, PDVSA president during the Chávez administration and a former Venezuelan ambassador in the UN. The big shot owns real estate in upscale Madrid neighborhoods, and controls a conglomerate of companies based in tax havens.

Another well-known bolibourgeois in Spain is Nervis Villalobos, former Venezuelan Energy Minister. He owns commercial offices in traditional zones at Madrid, and bought a 772 hectares farm in Monteagudo de las Salinas. The 150-inhabitant village is known as a stop for pilgrims following the Santiago de Compostela way.

Besides inflating negotiations, corrupting public agents and taking advantages of strategic relations to sell parts of state-owned companies, there are other ways to get rich illegally in Venezuela. “Many people also made money with the National Commission for the Administration of Foreign Currency, CADIVI, and set up their own companies”, explain Galaviz.

She refers to the government organ which regulates the sale of dollars at the official exchange rate for imports and tourist trips. It is estimated that since 2003, when it has first been implemented, around US$ 25 billion have been embezzled from CADIVI.

Corruption in an ancient problem in Venezuela, which precedes Chavism itself, according to political scientist Eduardo Viola, a professor at the University of Brasília (UnB). He says that Latin America has an overall framework in which businessmen who depend on the state thrive. It is what he calls “crony capitalism”.

In Venezuela, that bond has been strengthened for decades, thanks to oil. “The model has been in place for a long time, but the conditions which allowed the sacking of the state and PDVSA by party and Armed Forces members have grown extraordinarily during the Chávez days.”

In the professor’s point of view, Bolivarianism decimated many companies. “And that which has not been destroyed has been sacked, confiscated or expropriated using corruption funds.”  Among those who benefit from their promiscuous relations with power are military personnel, public servants, politicians and people who provide products and services to the government.

An example of such practice became public on August, when former German banker Matthias Krull turned state’s evidence to the US Department of Justice. The executive admitted taking part in a scheme to launder around US$ 1.2 billion from funds obtained through bribery and embezzlement from PDVSA and its controlled companies. Among Krull’s clients are no less than three of Maduro’s stepsons. According to the investigation, the sons of first lady Cília Flores have pocketed around US$ 184 million with this scheme.

“The situation of Venezuela, with the enrichment of these groups, demonstrate once again the deep affinity between contemporary forms of Socialism and the old patrimonialist tradition”, analyzes political scientist Fernando Schüler, a professor at Insper. Even though he regards the Venezuelan case as much more serious, he associated what happens there to what happened in Brazil under Lulism.

According to Schüler, there has been a confusion between the interests of big corporate groups linked to the state and specific positions in the public high bureaucracy. The consequence of that became clear with Operation Car Wash. The political scientist, however, points out that Brazil is not going down the same road as its neighbor. “Although there were some who sympathized with it, Brazil has never been through the process of ‘bolivarization’.”

Of pistols and nephews

In 2003, Chávez had been for four years at Miraflores Palace when Venezuela faced an oil workers’ strike, a movement organized by the opposition in their frustrated attempt of a coup. Businessman Wilmer Ruperti managed to circumvent the blockade and made the ships of his maritime transportation company available to Chávez, going from utter anonymity to PDVSA’s preferential partner. In the process, he became a multimillionaire.

Ruperti’s proximity to the former president had its extravagances. In 2012, for instance, he presented the government with two early 19th century pistols which belonged to Simón Bolívar. The guns, manufactured by Nicolas Nouel-Boutet – Napoleon Bonaparte’s gunsmith – are decorated with golden details and had been purchased at New York auction house Christie’s for US$ 1.6 million. During the last years, Ruperti, who also owns Canal I, one of Venezuela’s main TV networks, have watched his empire crumble due to the fall of oil prices, as well as fines and convictions motivated by his shady dealings. Still, he has never left the scene.

His latest chapter completed two years last September. In 2016, in an interview to the Wall Street Journal, he admitted paying for the defense of two nephews of the Maduro-Flores couple, sentenced to 18 years in jail in the United States for involvement with drug trafficking. In 2015, they were detained whilst planning to transport 800 kilos of cocaine to the US. Some statements from the interview read: “That is upsetting the presidential family” and “I am helping to preserve the constitutional government”. “There is an attempt to label Venezuela as a narco-state”, he said.

The assaults against bolibourgeois – including the Maduro family – do not stop there. On September 25, Donald Trump’s government put in place financial sanctions on the first lady, on vice-president Delcy Rodriguez, and on two government ministers. The measure involves the freezing of transactions and the confiscation of properties which belong to them, including a private plane with an estimated value of US$ 20 million. The airplane was registered to a straw man for Diosdado Cabello, president of the Constituent Assembly and current Chavism’s second in command.

In a 2017 report, Spanish internet newspaper El Independiente estimated at US$ 700 billion the embezzlements made by bolibourgeois over a period of 15 years. Opposition deputy Juan Guaidó, a source of the report, declared that Odebrecht pocketed US$ 30 billion for construction works that had up to then reached only 24 percent of its completion. “All this sudden greed, the fruit of the corruption, prevents food and medication from getting into the country. Corruption kills”, he summed up.

Despite initiatives to fight corruption, such as those undertaken by organs such as the Venezuelan Prosecution Office or even the US Department of Justice, the bolibourgeois carry on with their lives, more and more distant from the reality of the country in which they made their fortunes.