Fale a língua do mundo. Faça Wise Up.
Fri 01 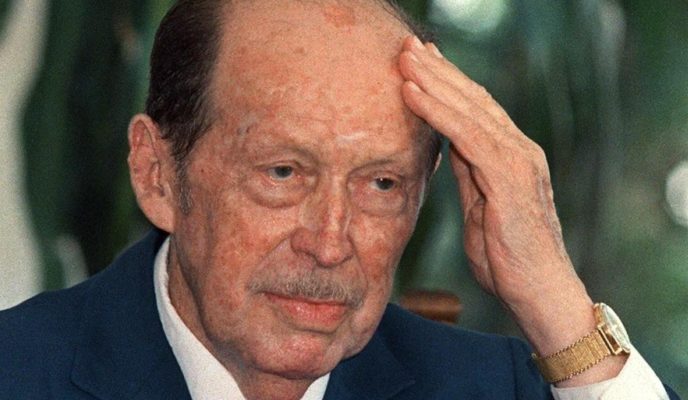 The Paraguayan dictator regime kidnapped children and kept a harem of sex slaves in the Sajonia neighborhood of Asunción. In there lived girls of all ages after the age of eight, most of them between 10 and 15 years of age

The meeting between president Jair Bolsonaro and Paraguayan president Mario Abdo Benítez was marked by controversy when, during his speech, the Brazilian called former dictator Alfredo Stroessner a “statesman”.

The context of his praise regarded the Paraguayan’s support in the construction of the Itaipu plant, however, at a moment in which Brazil is occupying a position of relevance along the Lima Group after endorsing requests for a redemocratization of Venezuela, his speech caused discomfort, since Stroessner was one of the most controversial of all South American dictators.

A military officer which belonged to the most backward wing of the Colorado Party, he rose to power after helping to overthrow Federico Chavez through a coup, in 1954, and then winning the following election – in which he was the sole candidate.

Remaining in the Palacio de los López until 1989, his administration was marked by a constant state of emergency and an appearance of democracy: there was an opposition, a parliament and elections were held, but the regime exerted its control through censorship and the arrest, exile or murder of the main opposition figures. Besides, elections were rigged – Stroessner obtained over 90 percent of voting intentions in all eight elections he took part.

The regime encouraged the involvement of the armed forces in the smuggling of cocaine, electronic equipment, and stolen luxury cars. It became a tool for his permanence in power.

There was a strong personality cult of the general throughout his regime, with his portrait being displayed in every public office – even those occupied by his opponents. Besides, the country’s second largest city was named after him, Puerto Stroessner (later renamed Ciudad del Este). Lastly, being a member of his party was a requisite to gain access to jobs and basic services, like medical care.

The government’s repression was so intense that between four and five thousand civilians were murdered, and hundreds of thousands of Paraguayans were exiled. At least 18,772 people were victims of physical, sexual and psychological torture during the regime.

Despite the human rights violations, the Paraguayan popular perception is still much favorable towards him, and his regime is remembered as a period of economic growth and public safety. A 2009 poll, for instance, showed that 41 percent of Paraguayans believed the country would be better if Stroessner was still in power.

Even though there were reports about the constant human trafficking and girls being violently raped by Stroessner and his ministers, with the exception of a Washington Post report denouncing the practice since the late 1970s, no official investigation had been made until July 2016.

On that year, the regime began to be investigated by the Paraguayan government, through its Department of Historical Memory and Reparation, part of that country’s Ministry of Justice. Establishing a parallel with Brazil, the department’s work can be compared to the National Truth Commission instituted during Dilma Rousseff’s first term in office.

It was revealed that, through its allies, the regime kidnapped children and kept a harem of sex slaves in the neighborhood of Sajonia, in Asunción. There lived girls of all ages, starting from the age of eight, and most of them between 10 and 15 years of age.

In an excerpt of the documentary “Calle de Silencio” (“Silence Street”), directed in 2017 by Jose Elizeche, one neighbor of the house where the meetings were held described the natural way in which this practice was done:

The practice was denounced at the time, but when police officers found out the residence belonged to an army colonel, the organ deliberately chose to omit itself.

The works of the investigators showed that the dictator demanded the constant supply of virgins for his abuses. It is estimated that Stroessner raped on average four girls every month, and during the period of three and a half decades raped over 1,600 children.

Fortune, exile in Brazil, and death

Alfredo Stroessner was overthrown by another military coup, in 1989, articulated by his political ally, Andrés Rodriguez. Soon afterward, the general obtained political exile in Brazil, who ignored all extradition requests so that Stroessner could be tried in Paraguay for homicide charges.

He lived with his son in an eight-bedroom mansion with a pool and private elevator, worth R$ 10 million, located in the restricted area known as Península dos Ministros (“Ministers’ Peninsula”), the most expensive area of the Brasília region of Lago Sul. He dies in the Brazilian capital in 2006, at the age of 96, leaving an estate estimated in R$ 3 billion, targeted by legal processes in Paraguay under the suspicion of having been obtained illegally.