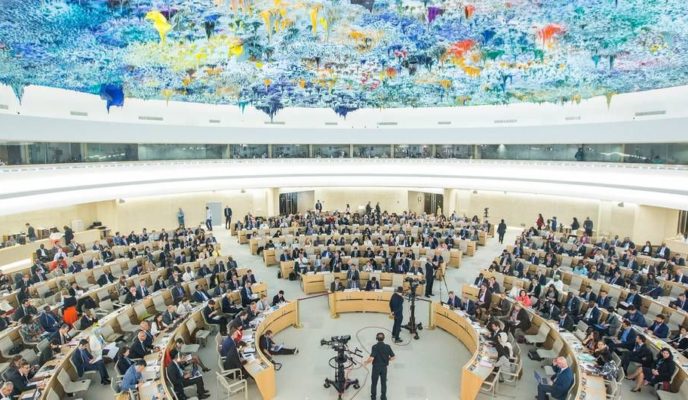 Brazil decided to align itself with Muslim countries and against its Western counterparts in the latest session of the UN Human Rights Council, opposing the use of expressions such as “sex education”, “gender” and “sexual and reproductive care services”. India will launch today a new mission to the Moon, signaling its increasing interest in space exploration, funded by the government of nationalist prime minister Narendra Modi. The recent trade war against the United States caused China’s economic growth to reach its lowest point in 27 years. Italian police seized an air-to-air missile during investigations into an extreme right organization linked to that country’s political parties; the missile allegedly came from Russian separatist troops fighting in Eastern Ukraine. Finally, a man flew on top of a hoverboard during France’s Bastille Day celebrations; the device may be used by special forces in the French military.

Why Brazil aligned itself with Muslim countries in the UN

Brazil is positioning itself in forums of the United Nations against the use of expressions such as “sex education”, “gender”, and “sexual and reproductive care services” in official documents. During meetings of the 41st extraordinary session of the UN Human Rights Council, which began on June 24th, the Ministry of Foreign Relations expressed its wish of rewriting sentences which used those terms. The Brazilian stance is in alignment with several Islamic countries, as opposed to that of most Western ones. Such measures are allegedly intended to strengthen family values and the defense of life.

India plans on embarking on its most complex space odyssey with the launch of the country’s second mission to the moon, Chandrayaan-2 – which will carry not only a lunar probe, but also its growing space ambition. The mission will land on the Moon’s relatively unknown South Pole, a crucial region, since it might contain water and craters where fossil records of the primitive Solar System may be found. The Indian space program has existed since the 1960s, but recently gained a fresh boost during the government of nationalist prime minister Narendra Modi. Modi increased the country’s space budget by 11 percent this year, reaching US$ 1.8 billion.

Amidst an apparently endless trade war against the United States, China’s economy has slowed down and reached its lowest growth rate in 27 years. The figures, released today by China’s National Department of Statistics, are seen as conservative by many economists for allegedly “masking” the real numbers; but they will serve to strengthen US president Donald Trump’s belief that his Chinese counterpart, Xi Jinping, is under strong pressure to close a deal which provides enough oxygen to the world’s second-largest economy. This trade war, however, has also been harmful to the US; Chinese imports of American products fell by 31.4 percent in May, when compared to the previous year.

Police officers in Northern Italy seized today an air-to-air missile in “good conditions” as well as several other sophisticated weapons during an investigation into extreme right-wing groups who allegedly received aid from Russian separatist troops fighting in Eastern Ukraine. According to the international press, three people were arrested, including 50-year-old Fabio del Bergiolo, an activist of right-wing party Forza Nuova. Along with the French-made missile, the police seized nine assault rifles, 30 hunting rifles, pistols, and bayonets, as well as ammunition and old Nazi placards with swastikas.

Man flies over crowd during July 14th celebrations in France

A man flew over the crowd attending the celebrations of France’s national holiday, Bastille Day, on July 14th, on top of a “flying platform”. The feat astonished the crowd and drew praise and applause from French president Emmanuel Macron. The device, called Flyboard Air, was invented and flown by French businessman and inventor Franky Zapata. French Armed Forces minister Florence Parly said that the invention, powered by five jet engines, has sparked the interest of her cabinet, to be used in the country’s special forces. Macron posted the video on his twitter account, and remarked: “Proud of our army, modern and innovative.”