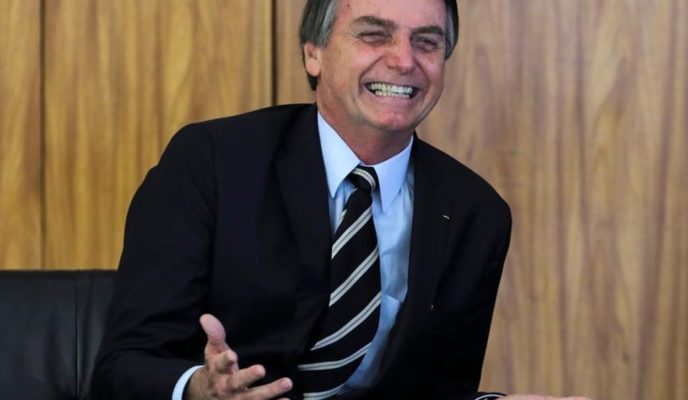 New party of the president of the Republic would allegedly be launched by Carmen Flores, senatorial candidate for the Rio de Grande do Sul PSL in 2018. Planalto Palace won’t confirm, and congressman says this hypothesis is “delirious”

Federal deputy Bibo Nunes (PSL-RS) classified as “delirious” and “maximum insanity” the speculation that president Jair Bolsonaro would be moving to a new party on April 7. The information regarding this move was disclosed by Zero Hora newspaper on Wednesday (13).

According to the report, the articulations for the president of the Republic’s next party are being conducted by Carmen Flores, who ran for Senate for the Rio Grande do Sul PSL in the October elections, but left the party late last year.

“This is an unfounded speculation. And Carmen Flores has no credibility to talk about it. I’ve spoken recently with Eduardo [Bolsonaro, federal deputy for PSL-SP and son of the president] and he said that there’s no sense in leaving that which is currently the party with most elected members of Congress to start a new party from scratch,” said Nunes.

Zero Hora reported that the launch of the new party would be held in the Dall’Onder Hotel, in the city of Bento Gonçalves, in the Serra Gaúcha region. Gazeta do Povo got in touch with the hotel, which confirmed the reservation of the space. The event is estimated to have 150 guests.

Sons are allegedly behind the articulation

The Zero Hora report also indicates that the Carlos Bolsonaro, president’s son and city councilor, is allegedly leading the national articulations for the foundation of the party, and that Eduardo Bolsonaro was motivated to create a new right-wing party after a trip to the United States in which he met Steve Bannon, a former advisor of US president Donald Trump.

Gazeta do Povo tried to contact Carlos and Eduardo to confirm the information, but did not obtain any answers. The Presidency of the Republic was also contacted, but said that “until the moment” Bolsonaro’s attendance in any event on that date in Rio Grande do Sul is not confirmed.

On February 18 Eduardo Bolsonaro denied in his Twitter profile the idea of founding a new party, published then by some newspapers.

PSL is the sixth party throughout Jair Bolsonaro’s political career. Previously, the president of the Republic was affiliated to PSC, PP, PFL, PTB, and PDC. Bolsonaro joined PSL in March last year. Until his arrival, PSL was among the country’s smallest parties. Now, as well as the president, the party has the governor of three states (Santa Catarina, Rondônia, and Roraima), four senators and 54 federal deputies.

What would he be headed?

Last month, rumors about the Bolsonaro family’s move to another party began to circulate in Brasília. According to O Estado de São Paulo newspaper, he would be headed for União Democrática Nacional, a party currently in the final stages of its creation, which would be a reedition of the former UDN, party which supported the military during the dictatorship.

With that move, the Bolsonaros would try to maintain their electoral capital in face of PSL’s weakening after the suspicion that it used public funds in straw candidacies in the 2018 elections. The accusations affected party president Luciano Bivar (PSL-PE), as well as Tourism minister Marcelo Álvaro Antônio, a reelected federal deputy who headed the Minas Gerais PSL last year.

The new UDN has already obtained 380 thousand signatures for its creation – the law requires 497 thousand for the ratification of a party. The party already has a Corporate Taxpayer Identification Number and directories in nine states, as also required by the electoral legislation for its ratification.

Who is Carmen Flores?

Carmen Flores is a Rio Grande do Sul businesswoman, and ran for Senate with Jair Bolsonaro’s unconditional support in the 2018 elections. She obtained 1.5 million votes, but did not get elected, coming in fourth place, behind Luiz Carlos Heinze (PP) and Paulo Paim (PT), elected for the state’s two senatorial seats, and Beto Albuquerque (PSB), in the third place.

Carmen was the state’s PSL president, and abandoned the party last December. She received R$ 200 thousand from the national PSL head office, an amount which came from the party fund, public money destined to finance parties and electoral campaigns. According to Folha de São Paulo newspaper, part of that amount went into the account of her family members, such as her daughter and granddaughter. The payments were listed in her accounting to the Electoral Courts.

The candidate’s daughter, Maribel Lopes, received R$ 40 thousand for the renting of a property in the same address as her mother’s furniture shop, in Porto Alegre. PSL’s office during the campaign was located next door, in a building which is now empty. The candidate’s granddaughter, on the other hand, received R$ 1,155.45 for handing out pamphlets in the street, according to the invoices. Besides, R$ 34 thousand were spent in Carmen’s store in tables and chairs.

When questioned about the use of party fund to buy goods for PSL, she said that it was “all legal”. Regarding the payment to her family members, she said that “there is no illegality in the contracts.”