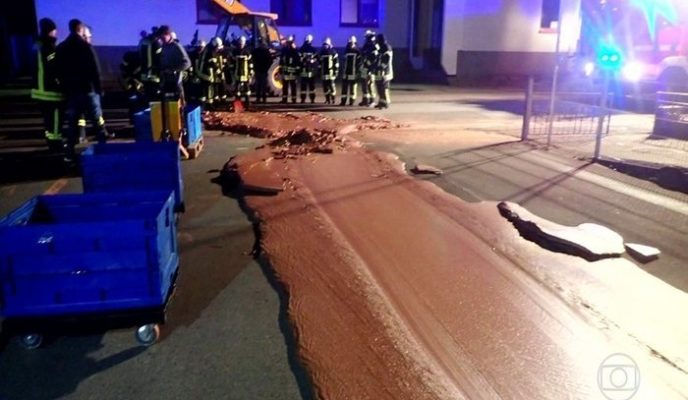 A tank at a chocolate factory in Germany overflowed, prompting a river of chocolate to breach the factory grounds and ooze onto Weststrasse, the nearest road

It was an accident. It was a municipal headache. It was a Roald Dahl fan’s dream.

Just before 8 p.m. Monday, liquid chocolate began streaming out of the DreiMeister chocolate factory in Westonnen, a suburb of Werl, Germany.

A tank at the factory had overflowed, prompting a river of chocolate to breach the factory grounds and ooze onto Weststrasse, the nearest road.

Soon, the leaked liquid chocolate – about a ton in all – solidified in the crisp December air, creating something of a magical carpet that blanketed Weststrasse.

“A ten-square-meter choco-pancake formed,” the Werl fire department explained in a dramatic statement that warned chocolate lovers to “stay strong” before reading about the incident.

Comparisons to “Willy Wonka and the Chocolate Factory” were inevitable on social media, with one person tweeting “Willy Wonka, that you?”

The Werl fire department said the road was closed for about two hours and cleaned “with shovels and muscle power.”

“This was a traffic hazard, which made the use of the fire department necessary,” the department said.

Images of the cleanup effort showed firefighters using shovels, blow torches and hot water to remove the congealed and hardened chocolate – and appearing to, alas, throw it away in nearby bins.

The Werl fire department assured people that “despite the heartbreaking incident, it is unlikely that a chocolate-free Christmas is imminent in Werl.”

DreiMeister chief executive Markus Luckey told the Germany newspaper Soester Anzeiger that it would have been “a catastrophe” had the spill happened closer to Christmas and that the chocolate factory would be reopened Wednesday.

It’s not the first time Europe has seen such a delicious mess. Earlier this year, about 12 tons of melted chocolate spilled across a highway in Poland after a tanker overturned.